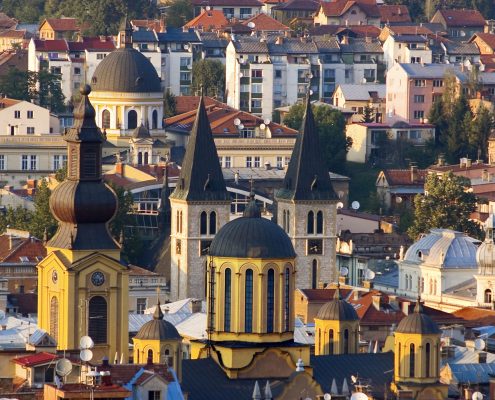 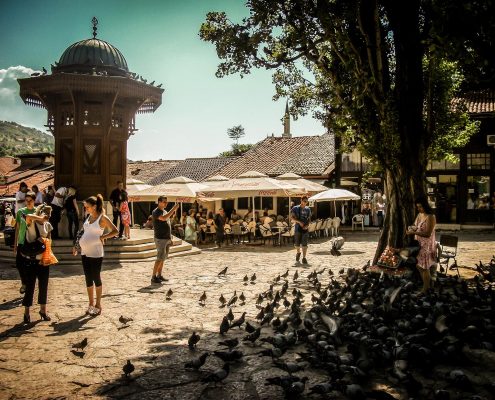 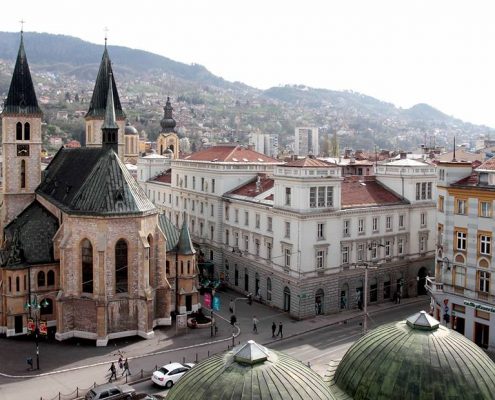 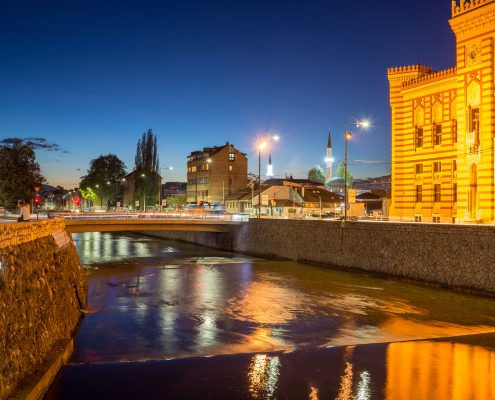 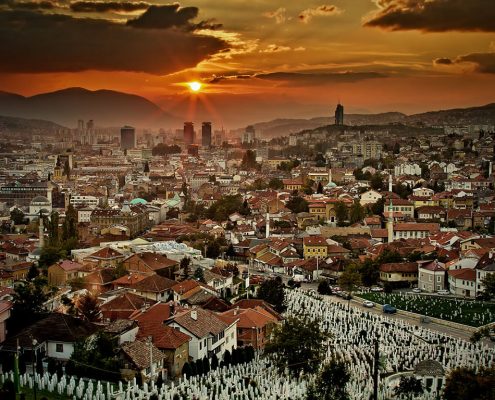 Sarajevo, capital of Bosnia and Herzegovina, is a compact city on the Miljacka River, surrounded by the Dinaric Alps. Largely restored following the 1990s Bosnian War, its historic core has museums and sites commemorating historic local events, including the 1914 assassination of Archduke Franz Ferdinand, which ignited World War I, and the 1984 Winter Olympics. The antique stone-flagged alleys of Baščaršija give the delightful Old Town core a certain Turkish feel, where you can try tasty burek (meat pie, sold in layers by weight or by piece) and ćevapi. Directly north and south, steep valley sides are fuzzed with red-roofed Bosnian houses and prickled with uncountable minarets, climbing towards green-topped mountain ridges.

Sarajevo has a wide tourist industry and a fast expanding service sector thanks to the strong annual growth in tourist arrivals. Sarajevo also benefits from being both a summer and winter destination with continuity in its tourism throughout the year. The travel guide series, Lonely Planet named Sarajevo as the 43rd best city in the world and in December 2009 listed Sarajevo as one of the top ten cities to visit in 2010.

Sports-related tourism uses the legacy facilities of the 1984 Winter Olympics, especially the skiing facilities on the nearby mountains of Bjelašnica, Igman, Jahorina, Trebević, and Treskavica. Sarajevo’s 600 years of history, influenced by both Western and Eastern empires, makes it a tourist attraction with splendid variations. Sarajevo has hosted travellers for centuries, because it was an important trading center during the Ottoman and Austria-Hungarian empires. Examples of popular destinations in Sarajevo include the Vrelo Bosne park, the Sarajevo cathedral, and the Gazi Husrev-beg’s Mosque. Tourism in Sarajevo is chiefly focused on historical, religious, cultural sites and winter sports.

Today, the city has physically recovered from most of the war damage caused by the Yugoslav Wars of 1992-1995. Sarajevo is a cosmopolitan European capital with a unique Eastern twist that is a delight to visit. The people are very friendly, be they Bosniaks, Croats, or Serb. There is very little crime, and the city ranks as one of the safest in South Eastern Europe.

The city is very tourist friendly, especially in the city center.

Duration of the trip from Split is 4,5 hours.